Georgian students are some of the youngest, compared to other European students

In our country, approximately 40 000 applicants make a choice in which university to study or what to study every year.
In Georgia, going to university as soon as you’ve finished school is the most common way to continue studying after having acquired secondary education. Consequently, as it turned out according to the international study conducted in European Countries - Eurostudent VI, Georgian students are some of the youngest, compared to other European students. 1 Namely, in almost all of the countries that participated in the study, almost half of the students are 25 years old or younger. For Georgian students the average age is 22 years. The majority of students in almost all European countries are women – the only exceptions are Turkey and Germany. 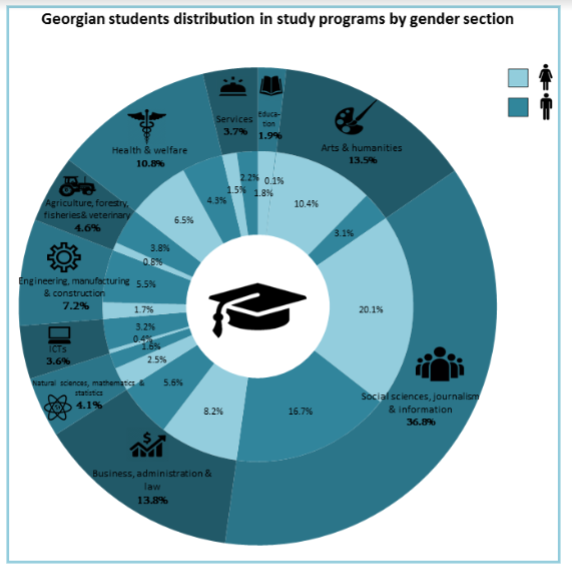 Despite the general abundance of female students in higher education institutions, there is strong gender imbalance in ICT. The smallest amount of female students is studying in this field. This problem, along with other European countries, strongly concerns academic programs with similar direction in Georgia.
The majority of Georgian students are working towards degrees in social sciences and journalism (36,8%), business administration and law are also popular faculties (13,8%), as well as arts and humanities (13,5%).

The least popular faculty among Georgian students is education (1,9%). Gender balance is the most skewed in this field – extremely small number of male students are studying for degrees in education (0,1% of total number of students).