Placement of ads in radio becomes more and more attractive for any business company. Many
factors precondition this trend including easy access to potential consumers. Radio is available at
home, public transport, car, in a mobile phone or internet. Radio is everywhere. Almost everyone
listens to it. The segment is diverse and it is possible to listen to the radio at work, during travel,
physical activities or entertainment. The price of radio ad is also important. The radio ad price is
considerably lower than TV ad value.
In 2017 IPM Researches conducted monitoring of 7 radio companies:
 Radio Imedi
 Radio Palitra
 Fortuna
 Fortuna +
 Ar Daidardo
 Auto Radio
 Radio Maestro
In 2017 in total 1 162 917 ads were placed in radio. This figure is 18 445 less than the previous
year indicator. However, the chronometry of 2017 exceeds the chronometry of 2017 by 712 590
seconds. Consequently we can say that in 2017 the ad air time was better utilized. Investment
parameter is also increased and in 2017 the official value of ads placed in radio amounted to USD
21 855 681.
In 2017 739 companies placed ads in radio. The majority of them (46 007) belongs to
Pharmadepot. It represents 3,96 % of the whole ad scheme. The second position is occupied by
Tegeta Motors with 36 944 ads. Its share equals 3,18% . Top 10 companies of the year 2017 are
as follow: 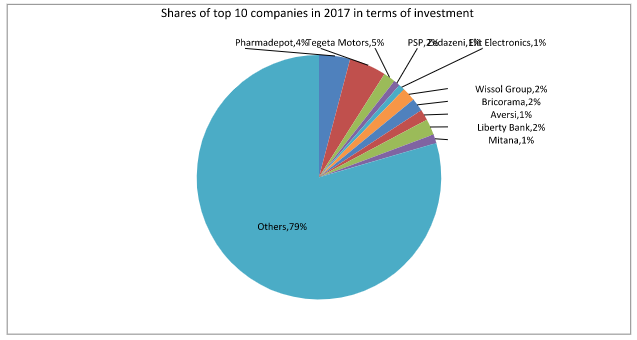