Radio advertising gets more and more attractive for any business company. Many factors
precondition this fact including easy access to potential audience. People listen to the radio in a
car, at home, public transport, via mobile phone or internet. Radio is available everywhere. The
segment of radio audience is diverse. It is possible to listen to the radio a work, while driving,
entertaining or during physical activities. The value of advertising is also important as it is far lower
in radio than in television.
Since the beginning of 2017 IPM conducts monitoring of 7 radio stations:

 Radio Imedi
 Radio Palitra
 Fortuna
 Fortuna +
 Ar Daidrardo
 Auto Radio
 Radio Maestro
Let’s consider the share of which radio station is highest during 3 quarters. According to monitoring
data within 3 quarters of 2017 796 055 ads were placed in radio. Radio Maestro is leading in terms
of number- 166 896. Then comes Imedi- with 124 231 ads. Radio Ar Daidardo is on the third
position with 121 141 ads.
The chart shows shares of monitored radio stations during 3 quarters of 2017. Sponsorship as well
as commercial ads are included: 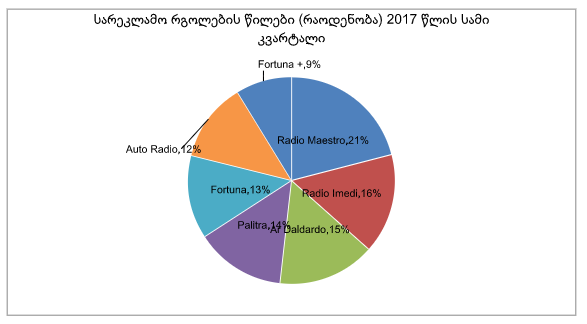 As for the number of commercial ads, the monitored radio stations provided 590 162 commercial
ads. Radio Maestro is a leader as it placed 18.26 % of ads. Radio Ar Daidardo comes second with
17.27%.
The shares of commercial ads are divided in the following way: