Men mostly communicate with their friends face to face, while women use social networks

Social media consumers are mostly women.
Women use social media more often to communicate with
both friends and colleagues, instead of communicating face to face.

“IPM Research” decided to find out how important role social media has in it’s users daily life, in the way of communication with their friends and colleagues. 600 respondents participated in the survey. 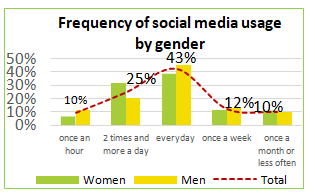 As it turned out, social media users mostly use it on a daily bases. Also, many of them do it twice a day or more often.

Consumers spend mostly around half an hour on social network when they access it (43%). The number of respondents who spend between half an hour and an hour at  one time, is also significant (36%). 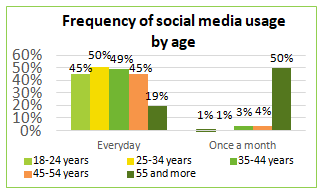 Usage of social media/networks on a daily bases is inherent in almost every age group. Low intencity of social media usage is typical only for people up to 55 year. 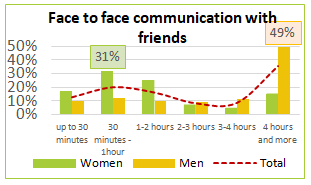 Half of these respondents (50%) uses social media once a month or less often. 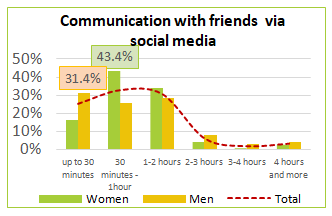 Also, women mostly spend 30-60 minutes in face to face communication with their friends during a week, whereas almost half of men (49%) spends 4 hours and more. 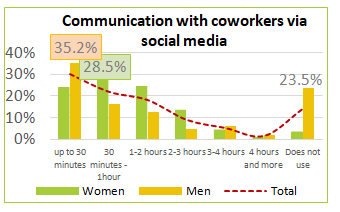 Situation is similar to the ways of communication with colleagues. Women spend more time communicating with coworkers via social media. Majority of them (28,5%) spend between 30 minutes to an hour for this reason while majority of men (35,2%) spend up to half an hour. Apart from this, 23,5% of men do not use social networks at all.

Majority of women (35,5%) spend between 30 minutes and an hour in face to face relationships every day, while majority of men (20,8%) devotes 3-4 hours to face to face communication with their coworkers 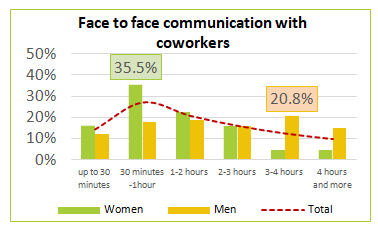