Georgians want German and American tourists the most to visit their country, while for Armenians the French are the most desired visitors.

1200 respondents from Georgia and Armenia answered the question: from which country they would like tourists to visit their own country. Last year, most tourists that visited Georgia were from neighboring countries. Armenians led the list, as well as Azerbaijani and Turkish. As stated by the survey, accordingly, 16%, 20% and 16% of Georgians are in favor of the tourist influx from these countries. As it turned out, hosting Russian tourists is the most desirable for Georgians compared to other neighbors (32%). Generally, hosting German (47%), American (47%) and French (44%) tourists is the most desired among Georgians. Only 2% of the surveyed mentioned that they wouldn’t want tourists from any countries to visit at all. (Respondents could choose more than one answer, thus total sum of answers is more than 100%.) 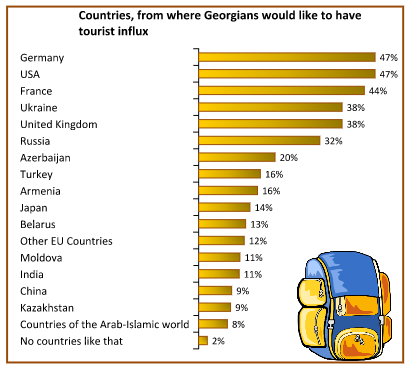 In 2017, Armenia had its biggest tourist flow from Russia, same as previous years. In the scope of the survey it was revealed that Armenians are welcoming towards Russian tourists - 37% of the surveyed would like them to visit Armenia again. French tourists turned out to be the most  desirable guests for Armenians (45%). 6% of Armenian respondents wouldn’t want any tourists to enter their country at all.